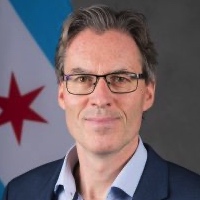 A seasoned marketing leader with more than 25 years of experience, Michael works alongside the Mayor’s office as the Chief Marketing Officer to ensure that all marketing, branding, and business development activities for the city are aligned with Mayor Lightfoot’s economic growth plan focused on inclusive growth across Chicago’s 77 neighborhoods. In December 2020, Michael stepped in as interim President and CEO of World Business Chicago to ensure a smooth transition to a new leader while intensifying World Business Chicago’s efforts to attract new companies to Chicago. It became clear very quickly that Michael was the right person to lead WBC into the next chapter and he graciously accepted the full time position in May of 2021.

Michael Fassnacht has been a recurring figure in Chicago’s civic community and has led critical pro-bono work for the rebranding of the Chicago Public Library and its foundation, the city’s Amazon HQ2 pitch, the city’s Census 2020 activities and most recently “Boards of Change”, an award-winning initiative to encourage residents to register to vote. Additionally, he has been involved as a board member with: Marwen, World Business Chicago, and the Civic Consulting Alliance; while providing counsel to P33, the Joyce Foundation and the Chicago Prize by the Pritzker/Traubert Foundation.

Prior to his role as CMO, Michael served for more than 10 years as CEO at one of the city’s oldest and most successful advertising agencies, Foote Cone & Belding (FCB). He led his agency to unprecedented international creative recognition and strong above-industry topline growth over his tenure. Before then, he was a successful start-up entrepreneur in Silicon Valley, and over his long career he has been recognized as a global expert in building and marketing brands.

Michael was born in Germany and made his way stateside in college where he met his wife, Dr. Rhonda Duffaut. They currently reside in Chicago and have two teenage children, Maya and Ryan.