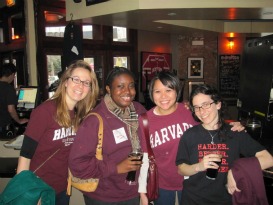 RECENT GRADS:  For membership purposes the Club divides the "decade group" into two halves.  The presumption is that those still in their first five years out of college may be attending graduate school or be involved in some other activity such that Club membership dues might be a problem.  The Club therefore has created a special "Recent Graduates" membership category for those Harvard alumni who graduated from ANY college (meaning undergraduate level) in the last five years, and provides them a year-by-year, one-year membership on a complimentary basis.  The only requirement is that the alumnus must sign up for this membership each year of eligibility so that the Club knows that s/he is still in the Chicago-area, and is still interested in membership.  Recent Grads also receive Decade Group discounts for many Club programs.

DECADE GROUP:  The other half of the Decade Group are similarly Harvard alumni who graduated from ANY college in the last ten years.  All Decade Group members are eligible for special Decade Group discounts for many Club programs.

In order to become part of the Decade Group you must first join the Harvard Club of Chicago.

The Decade Group usually meets at least monthly for happy hours and dinners at venues around Chicago, and it often joins alumni of other Ivy League, Seven Sister and similar colleges to expand the merriment.  In addition it regularly makes outings to local sporting events, musical concerts, and other local attractions.  It also has an annual tradition of volunteering at Chicago charitable activities during Harvard's Global Month of Service in April.

We look forward to seeing you at both Decade Group and Harvard Club programs in the near future!